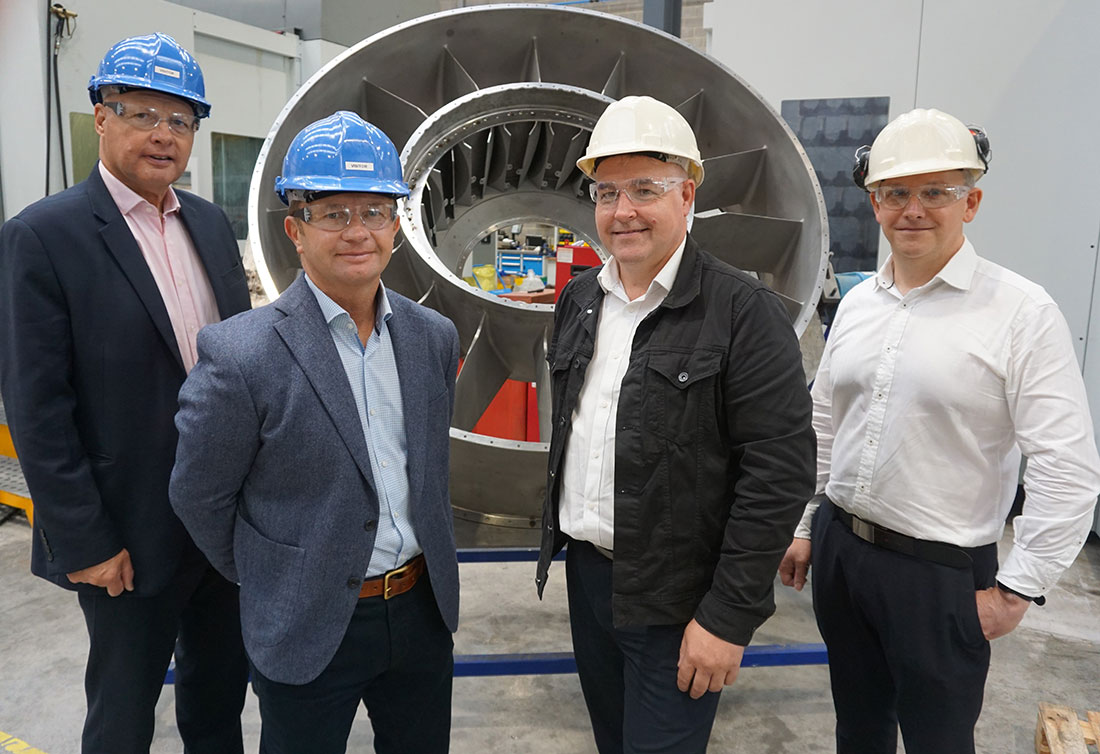 A world-leading steel engineering company’s decision to move to a new Middlesbrough business park has created 100 Teesside jobs with more to come.

Firth Vickers Engineering was a new company established last year after the purchase of the aerospace division of Tyneside-based Express Engineering.

Chief executive Robert McGowan said he was looking to re-locate the operation closer to Paralloy’s stainless and nickel alloy foundry in Billingham.

“We looked within a 20 miles radius and we were struggling to find something that was a good match for our needs and would allow us the opportunity to expand,” he said. “Some of the other facilities were tired and would have needed money just to make them suitable. TeesAMP was far and away the most suitable. It’s close to our main site, there’s excellent road communication and the image of the park is just right for us.”

The move also received financial support from Middlesbrough Council – one of the partners behind the TeesAMP project – and the company invested around £4m in equipment and the fit out of its three buildings. There was space to expand as demand for its services increased and there is still capacity for further growth.

It is currently working on a major contract to manufacture and supply steel pipes used in the production of blue hydrogen, where the pipes have to withstand 960 degrees Celsius throughout their lifetime.

Paralloy and Firth Vickers operate in a global market and are the only business of its kind in the UK able to provide its customers with turnkey components and assemblies. Raw materials arrive at Billingham where they are cast, machined and prepared. They are then transported a short distance to TeesAMP where teams of engineers work on the parts and assemblies, finishing them to high precision tolerances and standards.

“We go from base metal right the way through to a high precision finished product,” said the company’s general manager David Sibson. “That’s beneficial to the customer in so many ways, including shortening its supply chain and lead times.”

Paralloy and Firth Vickers’ success has seen 100 staff taken on at TeesAMP and Billingham in less than 18 months.

Mr Sibson anticipates recruiting 20 further employees for Middlesbrough and plans to launch an apprenticeship programme. He said that the unique nature of the services offered by the business, as well as the quality of his staff and surroundings, makes him highly optimistic about the future. “We’re expanding in this industry, so we wanted to make a statement and this business park allows us to do that,” he said.

Even though construction work did not start until 2019 – and despite the pandemic – 21 out of TeesAMP’s 22 buildings are now occupied.  Around 1,000 people work there. The last available unit has a floor space of 26,000 sq ft and is in a prime location near the front of the site.

The park’s developer the Chaloner Group will shortly apply for planning permission for the next phase of the project which will see the construction of 15 units, between 2,000 and 6,000 sq ft, which will be ideal for start-up companies.

Geoff Hogg, the chief executive of Chaloner Group, said: “The rapid development of Paralloy and Firth Vickers shows how the quality, location and accessibility of TeesAMP can play such a key role in the success of a business. These are exciting times for the whole of the Tees Valley and TeesAMP is playing a key role in its future.”

Commercial property specialist Dodds Brown has been involved in the project from the start and negotiated the deal which saw Paralloy and Firth Vickers move to TeesAMP.

“It’s a business at the forefront of a new wave of world-leading industrial companies based right here in the Tees Valley,” said Dodds Brown’s senior partner Stephen Brown.

“TeesAMP is a perfect example of a successful public/private sector partnership which has delivered a hugely successful regeneration project and created so many jobs already.”

He added: “All this has taken place during one of the toughest periods the UK economy has faced, first over all the Brexit uncertainty and then the pandemic. After years of industrial and economic decline TeesAMP is helping put the Tees Valley back on the map for business, innovation and collaboration.”

If you are interested in moving your business to TeesAMP contact Stephen Brown of Dodds Brown via s.brown@doddsbrown.co.uk or on 07973 732 260.